Bitcoin Paved the Way, but it’s Not the Future of Cryptocurrency

Until recently, I was extremely skeptical of cryptocurrency in general. In the midst of the investment speculation and mania in late 2013, when the price of Bitcoin first climbed to $500-$800, it smelled too much like digital Beanie Babies for my blood. So whatever interest I had in learning about the technology and its disruptive potential was buried underneath multiple layers of speculation sediment.

Two things piqued my interest, however: 1) I attended a Bitcoin meetup in Santa Monica and heard more about it and 2) the Jamacian bobsled team raised money to attend the Winter Olympics with a huge amount of support from Dogecoin.

So my interest in cryptocurrency grew and as an entrepreneur I wondered about what industries it could disrupt.

I imagine a world where I can run a legitimate business; open a merchant banking account; and accept orders from customers all over the world in a matter of minutes – without having to seek the permission of a lumbering, bureaucratic bank or credit card processing service that doesn’t give a shit about my business.

There’s a lot of exciting possibilities for cryptocurrency in general – it will take years, but it’s a real possibility that shouldn’t be dismissed.

That being said – there’s an empirical rule that I subscribe to when it comes to emerging technologies: “never bet on the first generation of a ground-breaking technology.”

I’m sure there are some counter-examples (I can’t think of any off-hand,) but they are few and far between for the simple reason that the inventors behind the new technology don’t have crystal balls and can’t anticipate every critical market factor. By and large - it's the second and third generation technologies that win. Windows, Office, iPod / iPhone, Google, etc...

So I suspected that Bitcoin would be slathered with “first generation” problems, and I wasn’t disappointed.

For most people Bitcoin is a speculative investment, not a currency

Investors all over the world buy and sell fiat (sovereign) currencies like commodities, and there’s investment markets and exchanges for it such as Forex (note: these's exchanges like this for Bitcoin too, such as Coinbase and BTC.sx.)

The big difference between a fiat currency like the United States Dollar and Bitcoin though, is the the number of dollars in circulation moving from person-to-person versus sitting dormant in an investment account waiting for the value of the Euro to fall is orders of magnitude larger. The amount of dollars held for foreign currency trading is a drop in the bucket compared to how much is spent buying goods, being loaned, et cetera.

Bitcoin, on the other hand, has been on the receiving end of a speculation bubble unlike anything I’ve ever seen since the rise of the Beanie Baby. People who successfully acquire Bitcoin, whether through mining it or buying it, hold onto it rather than spend it. 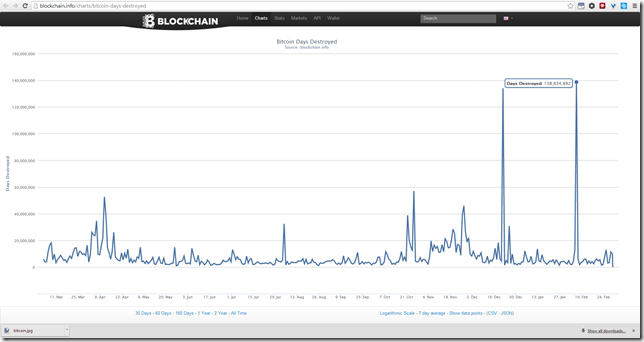 The chart above is from the official blockchain.info charts and it shows “Bitcoin days destroyed” – if someone received 100BTC 7 days before they sold it, it would destroy 700 days worth of bitcoin trading days during that waiting period.

The maximum number of Bitcoin that can ever be minted is 21 million, if I recall correctly. The number of days destroyed on the chart for the past year indicates that since the value of Bitcoin really skyrocketed in October, 2013, bitcoins are finally starting to move as people sell them for USD or other fiat currencies.

And this has been true of Bitcoin in general – since its value started to take off, it’s been viewed as an investment speculation rather than a money transfer mechanism used for buying goods / services. I don’t even feel the need to look for a citation for that last sentence.

The other factor that really contributes to “Bitcoin as an investment” is its inherent deflationary policy – if someone loses a hard drive with $6m worth of Bitcoin on it, that currency is gone forever and the total available amount of Bitcoin anyone can ever have decreases. Scarcity with Bitcoin will always increase once the last coin gets mined, as currency will be lost or destroyed over time with no possibility of replacement.

So when you combine both of these factors – fever pitch speculative investment and guaranteed increase in scarcity, you get sensational claims about Bitcoin being worth $100,000 per coin by 2016. Which in turn creates more speculation and blah blah.

So why would I turn around and buy a laptop off of Overstock with Bitcoin if I think that Bitcoin is going to be worth 100x what it is today? Wouldn’t I just keep holding onto it, like the chart above indicates? Well, yes!

Bitcoin as an investment, today, is driven by the greater fool theory of investment – that some other idiot will buy the Bitcoin you bought at a greater price because he can sell it to another idiot. Bitcoin will have real value when people start actually buying real goods and services with it, which they largely are not right now.

Compare this to Dogecoin – a currency with an unlimited theoretical number of coins in circulation (designed to eliminate the threat of lost currency), where the value of each individual coin is so low that people are actively inventing ways to spend them. Hence why Dogecoin’s currency transaction volume is several times higher than Bitcoin, despite the fact that the Doge is only a few months old.

Overstock and Playboy and other companies might be accepting Bitcoin for purchases[footnote: although they really aren’t – Coinbase accepts all of the currency risk and pays them in USD, but that may change in the future.], but we have yet to see if people will buy. With Dogecoin on the other hand, people already are.

I believe that Bitcoin’s deflationary policy will ultimately make it a loser in the long-run, when it comes to businesses being willing to accept BTC at face value rather than index it to the dollar. Ultimately the BTC speculation bubble will implode and correct itself down to the actual good / services buying power of the coin.

An inflationary policy, not unlike what most fiat currencies do, is what has historically been successful at increasing volume (and volume == buying power == value for cryptos) and I don’t see any reason why that would not hold true for cryptocurrencies as well.

Every post-Bitcoin cryptocurrency implementation uses “mining” as a form of expanding the currency over time although “by how much?” and “until when?” varies.

Mining was initially the easiest way to acquire Bitcoin or any other cryptocurrency – take a computer that has a decent graphics card and you can mint a few thousand of them in a week. However, over time the difficulty – the amount of work required to discover a new block of coins, increases dramatically.

So the amount of new coins you can discover drops. However, miners are still supposed to be theoretically encouraged to mine as a result of the increase in value of the currency – that way the miners can break-even and maybe even make a profit on the costs of electricity, hardware, and bandwidth needed to mine.

One of the issues that Satoshi or any of the early Bitcoin inventors could not have anticipated is the rise of ASIC (Application-specific integrated circuit) miners – machines custom-built for executing the SHA-256 algorithm specifically, and they can do it several orders of magnitude faster than a general-purpose computer can at a fraction of the cost.

These machines are really only available to people who have lots of resources and relationships with custom foundries in China, where the hardware can be made, organizations like cex.io and others.

These machines nuked the difficulty of the current Bitcoin blocks beyond a point where the average person can't realistically mine and make a return to even cover the cost of electricity used while mining, but more over it introduced the possibility of a 51% attack – a mining pool, or a cartel of pools, that controls 51% of greater of the total hash rate for Bitcoin has the power to do all sorts of things to Bitcoin’s stability.

For instance, there was a proposal on /r/Bitcoin this week (I can’t find the link at the moment) to have the mining pools point to and validate a new, special “emergency block” containing 750,000 new Bitcoins in order reimburse the people who lost their Bitcoins during the Mt. Gox fiasco. This proposal is being ignored because it would set a terrible precedent, but imagine what might happen when Bitcoin’s last block is discovered and the block rewards diminish to the point of just transaction fees?

What if GHash.IO or any of the other mining pools who control access to ASIC miners decide to improve their returns by not validating CoinBase or OverStock’s Bitcoin transactions unless they pay the mining pool a percentage of revenue? What about rewarding themselves with new blocks, per the Mt. Gox proposal?

It’s a real possibility – there would be outrage from the community of course, but outrage won’t buy you ASIC mining capacity to dilute the share percentage of a mining cartel.

This problem is largely due to the simplicity of the SHA-256 algorithm – it’s easy to build ASIC computers for it.

Virtually every other major altcoin since, beginning with Litecoin, has adopted the scrypt hashing algorithm to attack this very issue and make it uneconomical for any one party to dominate the net hash rate of any given currency.

Scrypt is memory-hard – it is designed to make it extremely expensive to execute large-scale hardware attacks by requiring large amounts of memory to compute each individual hash, which makes it suitable for graphics card (GPU)-based mining – an activity that individuals can participate in economically.

There are other coins, such as Vertcoin, that have gone beyond even what Litecoin and its derivatives (such as Dogecoin) have done to make it uneconomical (different from impossible) to use ASICs for mining, thus defeating the threat of a mining cartel seizing control over the behavior of the public ledger.

Unless nVidia or AMD wants to get into the business of operating its own mining pools, it’s not supposed to be economically feasible for any one organization to buy 51% of all GPUs used in mining operations.

So in conclusion, the potential for a 51% attack with Bitcoin is very real – the miners who are able to secure relationships with custom ASIC foundries in China can make the rules at-will with BTC.

Not true for the second generation cryptocurrencies like Dogecoin and Litecoin, which fundamentally makes them less risky and more predictable in the long run.

The most common argument I hear from Bitcoiners isn’t really an argument at all; they say words, but what I hear is “well, I invested {x} into Bitcoin therefore it must succeed.”

The real argument that Bitcoin has going for it is momentum – it’s paving the way for cryptocurrencies to actually emerge as things that people really use to buy goods and services. In the long run, cryptocurrency will succeed in transforming how we buy and sell.

But I don’t think it will be Bitcoin that emerges as the leading standard, for the reasons I stated above.

Overall, I’m just happy that there’s a future in-store for me where I can do about my business without having to deal with the bureaucratic paralysis of banks when it comes to accepting orders from customers around the world.

Bitcoin is an issue that has a lot of emotionality and dollars attached to it – please keep it civil in the comments.