How to Use the Microsoft Enterprise Library Validation Application Block, Part 1

All user input is evil, and you know it. Since the inception of .NET, ASP.NET developers have had access to the ASP.NET Validators Control Library, which made the previously tedious process of validating form input simple and in many instances, trivial. Microsoft's Enterprise Library makes this familiar ASP.NET functionality available at the object level in your applications via the Validation Application Block, which I've been using throughout some of my new projects.

It can take a while to get familiar with the Validation Application Block, so my goal here is to show you how to quickly get started with it using attribute-based validation, which in my opinion is the simplest way to implement validation. By the time you're doing reading this you'll know how to use built-in validators such as the RangeValidator, RegexValidator, DateTimeRangeValidator, and so forth.

In addition to these built-in validators the Validation Application Block also includes methods for creating user-defined validators and for composing validators into ValidatorCompositions which can process more complex validation rules.

Before you worry about how to start adding validators to all of your business objects, you need to include the necessary assemblies into your Visual Studio / Visual [X] Express projects. After you've downloaded and installed the Enterprise Library 5.0 or *Enterprise Library 4.1 binaries onto your system, open your existing Visual Studio Project or create a new one. Open the Solution Explorer, expand the References folder, right click on the References folder and click on Add Reference. 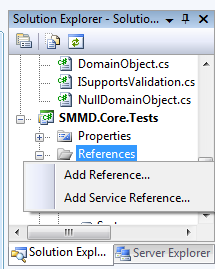 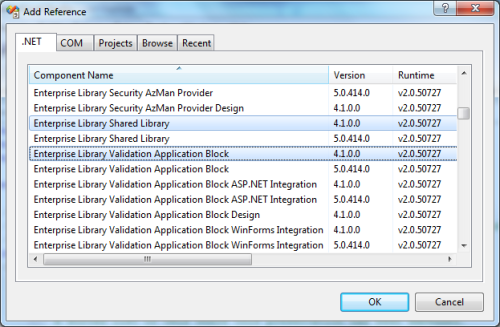 I'm going to end this post with a simple example which will show you how to get started using the Validation Application Block's attribute-based validators, and I'll expand on this in subsequent posts. We're going to work with a simple class which contains an address based in the United States:

We know that addresses based in the United States need to comply with the following business rules:

So, let's examine how we can use some validators to ensure that this business object enforces these business rules. The first step is to ensure that our source code references the correct namespace:

Next, let's go ahead and enforce business rule #1 - all address fields must be filled in. We can accomplish by decorating each field with NotNullValidator attribute:

Let's see if this works. Here's some simple code we can use to test the validators by calling the Validator.Validate() method against an instance of this class.

And what happens when we run this test code?

Smells like success to me. Let's re-run this test using a valid address.

And the result is:

Looks like the NotNullValidator is working as intended. But wait a minute, how did this ValidationFactory.CreateValidator() method know how to create a Validator object that properly validates any instance of a USAddress object?

Let's enforce some of the other business rules, starting with the state code.

As you can see I've added a StringLengthValidator in addition to the NotNullValidator that was already in place (yes, you can add more than one Validator attribute to a field.) I've specified the following parameters for this validator:

Now the next change we need to make is to check for a valid zip code, which can be either 9 or 5 digits. I'm going to do this using a RegexValidator - another way to do this is to create an ValidatorComposition (an "Or" type as opposed to an "And" type) with two different string length validators. Here's what our RegexValidator looks like:

Hat tip to Microsoft's Patterns & Practices group for providing me with the regular expression for validating US zip codes.

Now, our source code for testing this validation has not changed one bit - all of the changes to the validator for the USAddress class occur behind the scenes. Once I recompile my class library and re-run the test I should get a "validation successful" message back from the console:

Well hell yeah, that'll do it! If I wanted to validate the last business rule (the street address must contain both a street name and number,) I could write another RegexValidator for that and hook it up in much the same way as my RegexValidator for zip codes. And that's all it really takes to get started with the Microsoft Enterprise Library Validation Application Block. In my next article on the subject I'll include some examples on how / when you should use ObjectValidators and why they're so useful.

*Although the latest version of the Validation Application Block is version 5.0, my example code uses Enterprise Library version 4.1, namely because my individual development environment has some issues with the Validation Application Block 5.0 and the GAC. Given that there are no major syntactical differences between the two versions, I'm going to do what any economical programmer would do and use what works instead of dicking around with configuration files, assembly directories, and things that are frankly tangential to developing applications.