A Eulogy: the Tenacious Pursuit of Happiness

On Tuesday, January 5th 2021 my grandfather, James Chester Roush, passed away in his retirement community in San Diego, California, peacefully in his sleep. He was 96 years old. He was a World War II veteran, serving as a navigator-bombardier for the US Army Air Corps on a B-26 Martin Marauder stationed out of Sardinia and later, Dijon France.

My grandfather was a personal hero of mine - a man I admired and looked up to throughout my life. I loved his stories about his early life, his time in the war, his hunting and fishing adventures, and in their totality: discovering the lost, rugged world he was born into through his lived experiences. He witnessed the amazing transformation the 20th and 21st centuries brought to our world. But first, his life began with one hardship after another. 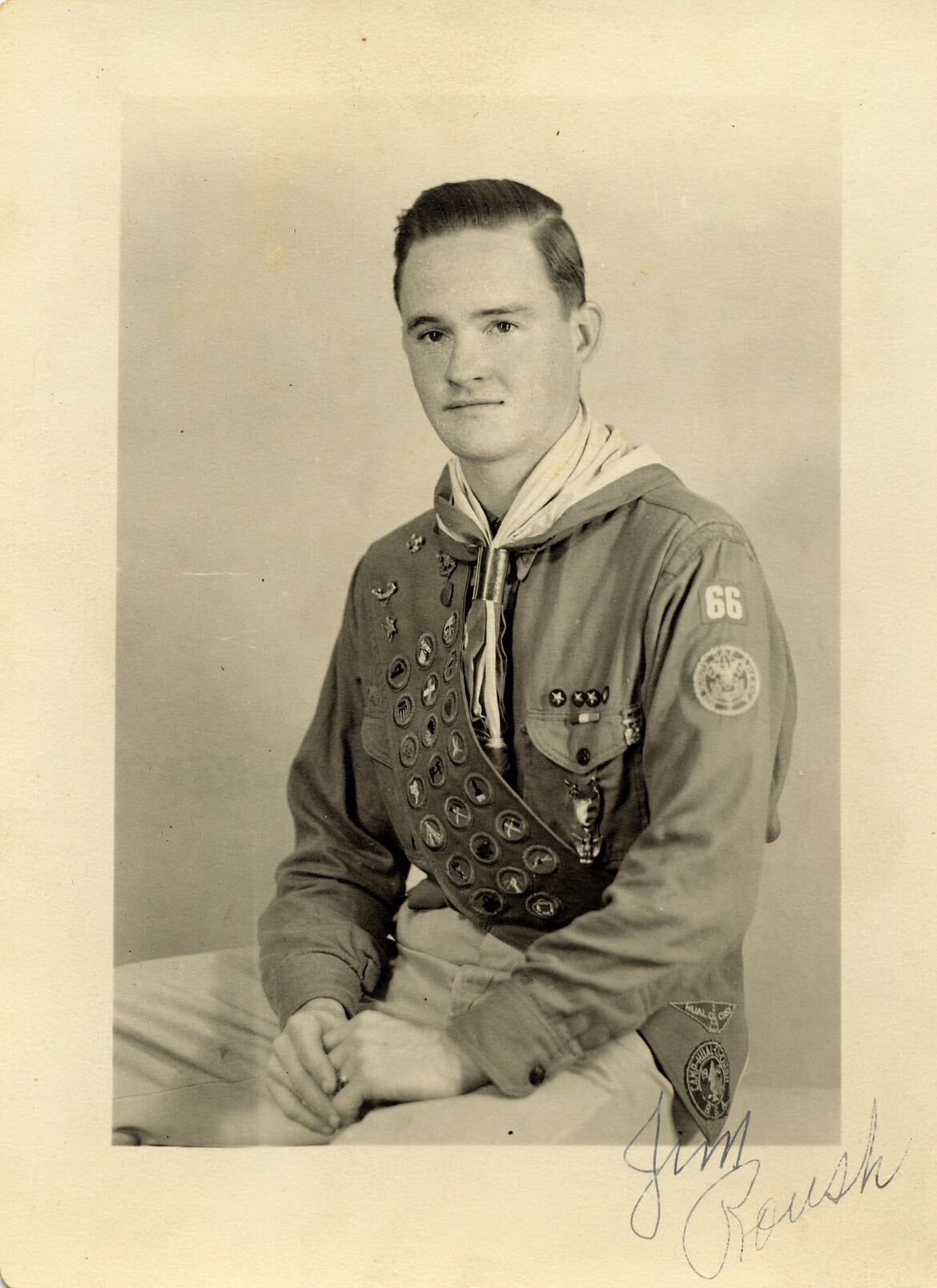 My grandfather, the eagle scout.

My grandfather was born in 1924 in Strausburg, Missouri, USA. My great grandfather, Ward Roush, was the first member of my family to go to college - he attended an agriculture school and landed a job with a railroad company in Strausburg.

However, during the start of the Great Depression in 1929 he lost his railroad job and became a tenant farmer outside of Strausburg. They rented a 90 acre farm on a patch of land that had once been covered by groves of black walnut trees, living in a house with no running water and no electricity. He, my great grandmother, and their five children worked the farm together - raising chickens, hogs, a couple of cows, some horses plus all of the food to feed those animals, primarily corn and oats. “If the animals didn’t eat, we didn’t eat” my grandfather once said.

My grandfather attended a small country school that had all of the children from first grade through eight grade all in a single room. My grandfather, his brother, and their father hunted possum for their pelts during the winter, when their pelts were thickest and most valuable, to help pay the rent on the farm.

In 1936, when my grandfather was a sixth grader, a major drought killed off most of the oat and corn crops on the farm and destroyed the animals’ food supply. My great grandfather, seeing no other option, auctioned off all of their livestock; bought an old Buick with a trailer; loaded the entire family plus as many canned goods as they could find; and headed out west to San Diego, where his brother owned and operated an auto garage. My grandfather’s journey west could be lifted straight from the pages of Grapes of Wrath.

My great grandfather went to work in his brother’s garage and my grandfather resumed his schooling in their new home in Chula Vista, California. They made it work - my grandfather became an Eagle Scout, graduated from high school, and went to work at North Island Air Station installing Pratt and Whitney engines into aircraft for the U.S. Navy.

Shortly after graduating, my grandfather was drafted into the U.S. Armed Forces to serve in World War II. He was 17 years old. 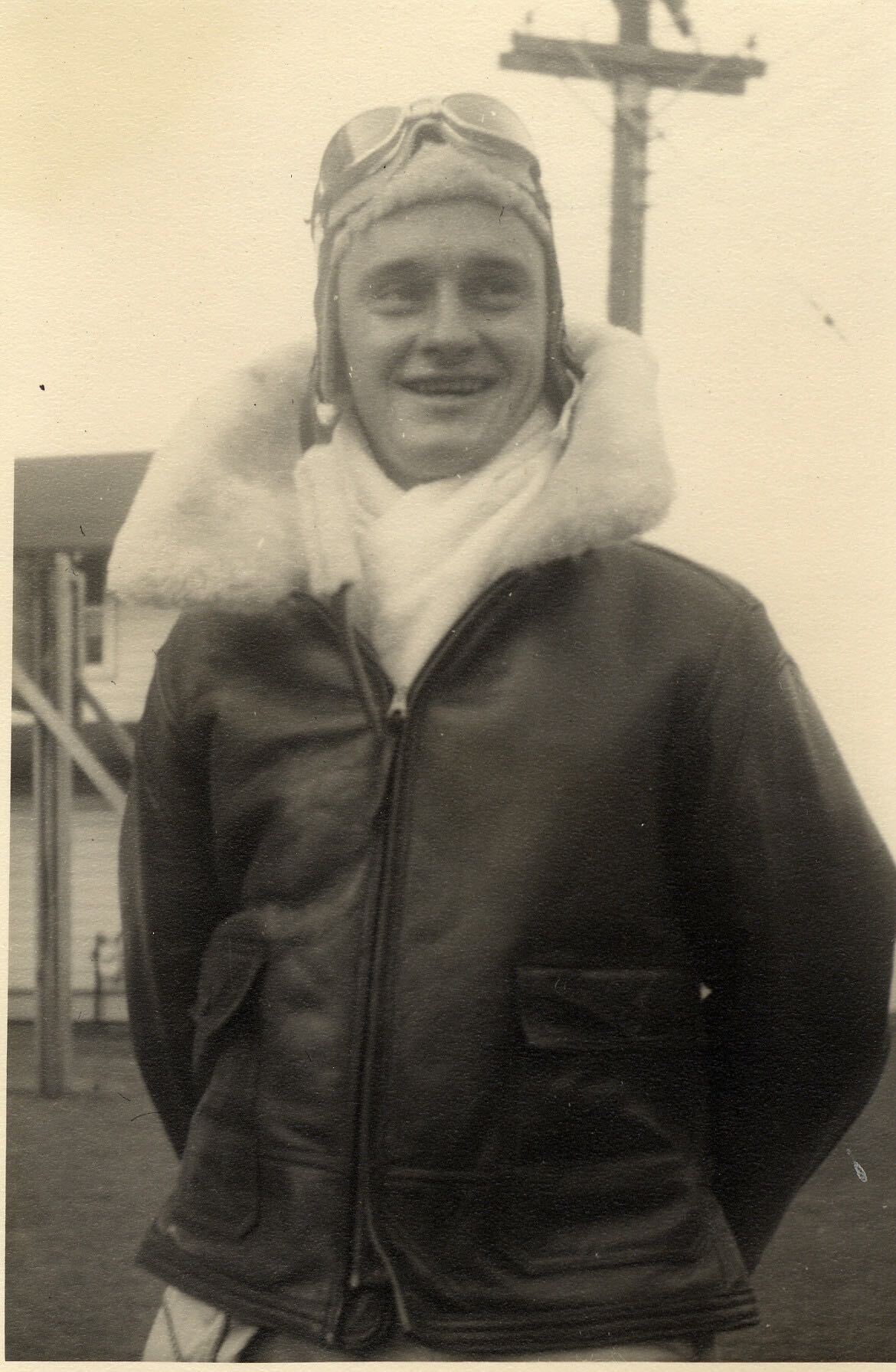 James Chester Roush wearing his bombardier jacket prior to a training mission aboard the B-26 bomber he flew with the U.S. Army Air Corps.

Eventually, my grandfather made his way to flight school and bombardier school - training as a navigator-bombardier aboard a B-26 Martin Marauder. B-26s had a roughly 50% casuality rate during World War II, earning them the nickname “Widowmaker.” My grandfather’s older brother, Henry Roush, died in a B-26 plane crash during a training exercise. His battlegroup was deployed initially to Sardinia to assist with the Allied Forces’ Italy campaign, and later he was deployed to Dijon, France to bomb the Siegfried Line in order to make the way for the Allied invasion into Germany.

He had flown 30 combat missions by the time V-E Day occurred; he’d won a Purple Heart from a wound inflicted by German anti-aircraft fire (flak;) his battlegroup had been attacked repeatedly by Luftwaffe sorties; but made it home in one piece. He was just shy of his 21st birthday when the war ended.

He returned home to San Diego, California back to his old job repairing naval aircraft at North Island Air Station. He married my grandmother, had five children including my mother, and worked at North Island for 30 years.

And this brings me to what I am going to miss most about my grandfather.

James Roush was not an ambitious man in the modern sense of the word. By the time he was 21 years old he’d already had his fill of sitting in the front row of history. He didn’t aspire to great wealth, fame, or power. What my grandfather and grandmother wanted was to build a great family and to provide their children with the type of security that was unavailable to members of the Greatest Generation. And in that, they succeeded - 5 children, 10 grandchildren, and a growing flock of great grand children.

My grandparents pursued the things that really matter - the bonds of family, faith, and friendship. And in that, they were the richest people I have ever known. 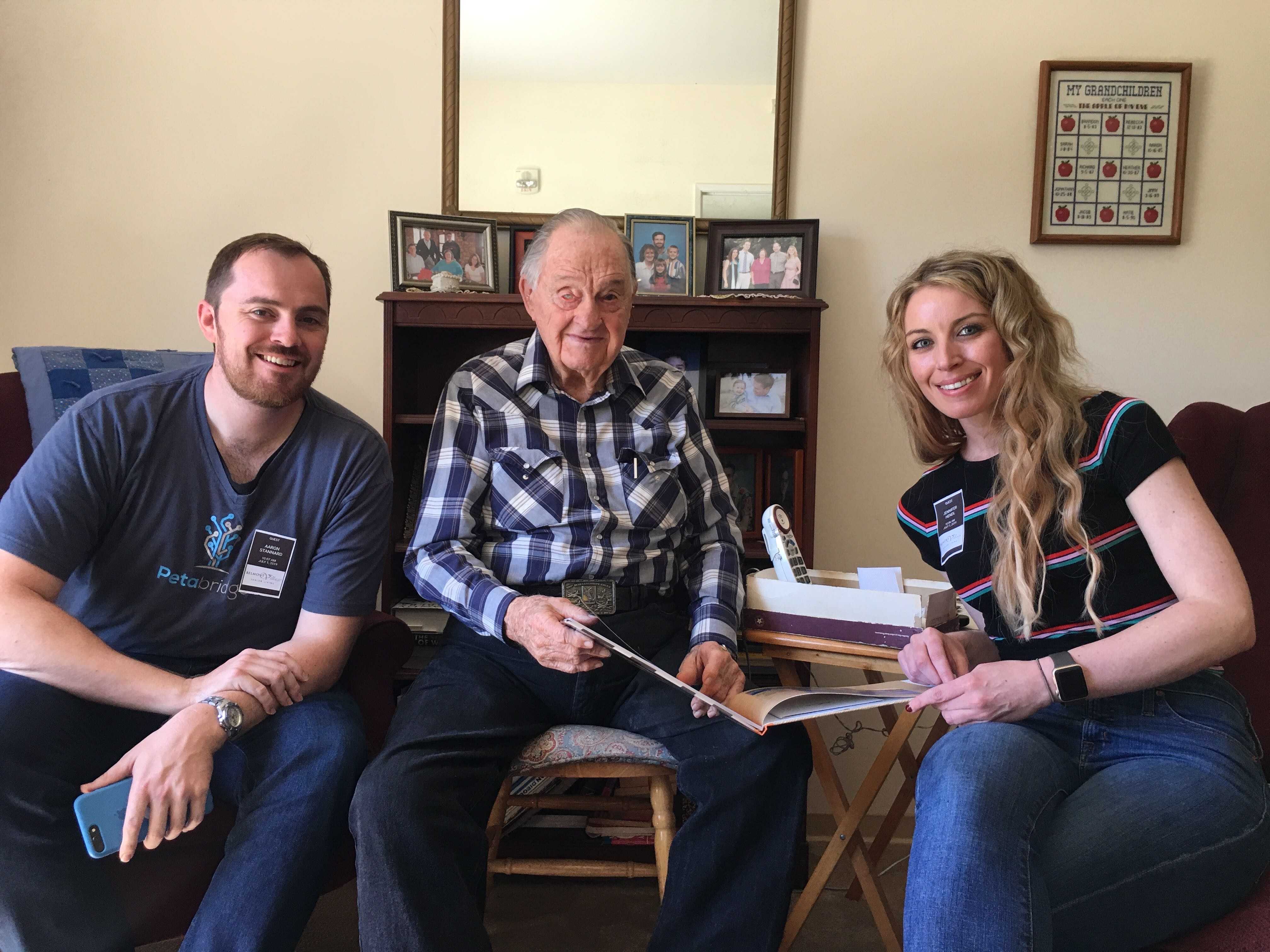 My wife and I visting my grandfather in 2019 in San Diego, CA.

It is all too easy to take for granted the comforts we enjoy today - and forget the hard living on the little farms in the Strausburgs of the world. It’s easy to overlook what actually matters - our relationships with each other - when we’re preoccupied with the pursuit of the next milestone or bauble. At time of his death my grandfather had lived a life 96 years rich in experience, commraderie, friendship, and family. He died a man in full.

I will profoundly miss hearing his stories, sitting around the campfire with him, or losing to him at a game of Cribbage at Christmas. And I am eternally grateful for all of the time we spent together. And from him, I will always remember what matters most.