Writing Better Tests Than Humans Can Part 2: Model-based Tests with FsCheck in C#

This is the second post in a 3-part series on property-and-model based testing in FsCheck in C#.

A property test is meant to be fairly succinct and verify that simple properties hold true for all possible inputs given a set of preconditions. But what if you need to test a more complicated scenario, like one where the state of a given object is influenced by the previous operations that might have occurred?

Our previous example of the FixedSizedList<T> or really any type of collection is a good example of an object. The state of that object will be determined by what’s already been added to the collection, its initial state, what’s been removed, etc… So for scenarios like that we’re going to use a model-based test.

In a property-based test we randomize the inputs a particular operation uses - that can be configuration settings, input to a method, and so forth.

So rather than come up with a contrived example, I’m going to use a real example of where we used FsCheck to prove the safety of Helios 2.1 - the socket library that powers the remoting and clustering systems inside Akka.NET 1.1. Helios 2.1 is running my personal fork of the DotNetty engine alongside all of its previous 1.* APIs.

DotNetty and Helios 2.x use a duplex “pipeline” model to process events going out to and coming in from a socket. Here’s a visual of how the pipeline model is structured: 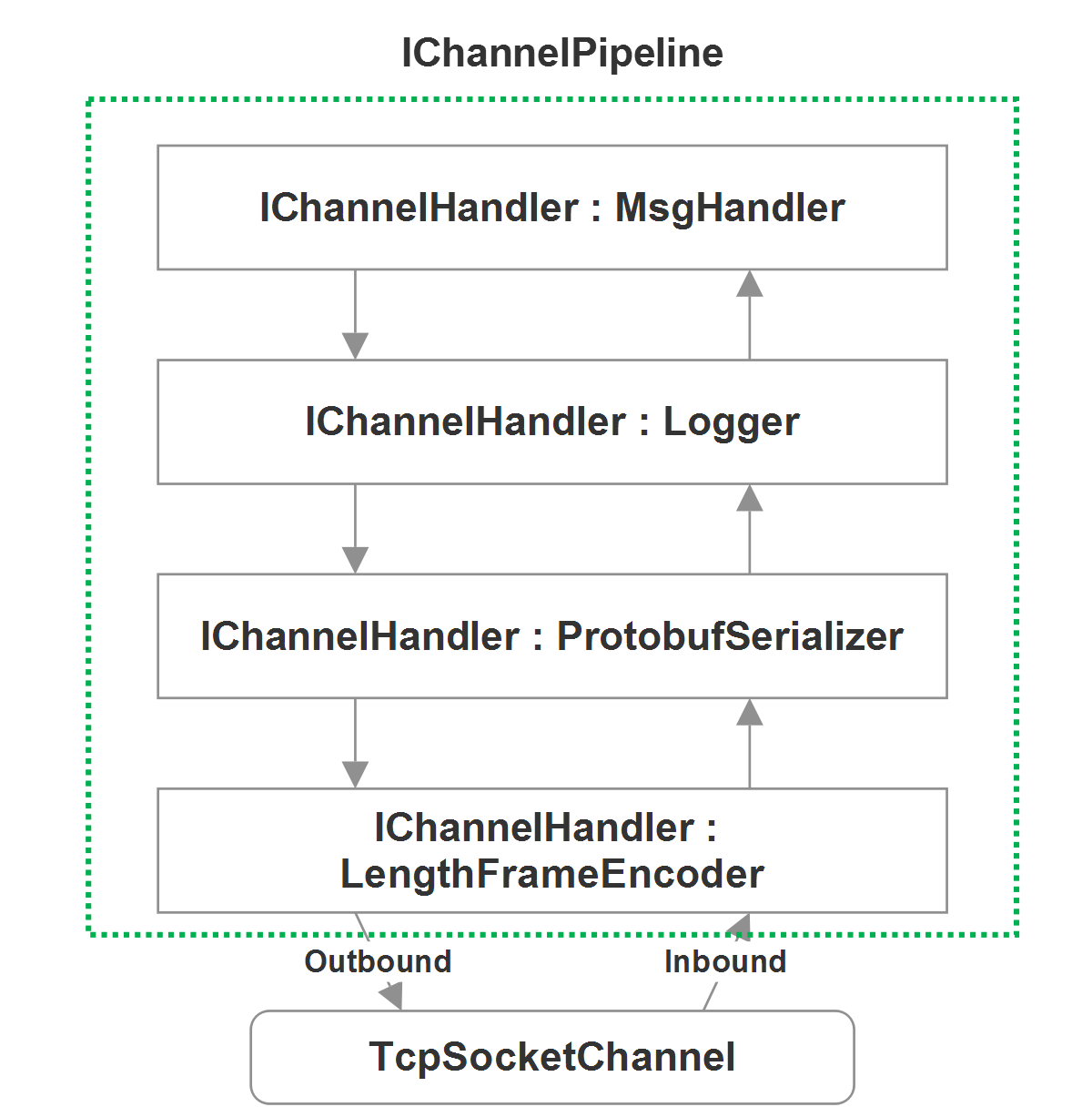 This pipeline is asynchronous and can be modified at run-time in a thread-safe manner; but most importantly, we ensure that events flow through the pipeline in the correct manner: top-to-bottom for outbound events (writes) and bottom-to-top for inbound events (reads.)

This type of construct is essential to making our networking system extensible, flexible, and it actually is a key feature of DotNetty’s performance guarantees as well.

Therefore, it was essential that we validate the following things about Helios’ pipeline model:

Given all of the different types of events (12), the three different features (setup, removing, adding), and all of the possible orderings of channel pipelines… Verifying that these four behaviors worked as expected for all of those possible combinations would have been a nearly impossible task to do by hand. Hence why I opted to describe a model for how this pipeline behaves instead.

The approach I chose for modeling a real IChannelPipeline was to use a linked list structure, since that data type is the simplest representation of the real pipeline itself.

I removed most of the implementation details of the model for the sake of brevity, but you can see the full file in its entirety here.

The PipelineModelNode represents and individual stage in the IChannelPipeline and is used to create our linked list model of how the pipeline is constructed. The methods on the PipelineMutationModel are used to traverse this linked list to predict how the real IChannelPipeline implementation class should perform during each of the operations we’re about to test.

The model is supposed to do two things here:

Building an FsCheck Model Based Test

Now that we have a model structure we can work with, we have to actually describe our test and its behavior. We do this using the Machine<TActual, TModel> class in FsCheck.

Implementing the two methods themselves is trivial, as we’ll see later, but the real trick lies in defining our Setup and Operation classes.

All we do here is create a brand new DefaultChannelPipeline in the Actual method, where we want to create a new instance of our object under test, and a PipelineMutationModel in the Model method - our model designed to predict how the actual IChannelPipeline implementation will perform.

It’s possible to have multiple types of setup objects in play for any given model based test, but in our case we’re usually better off just starting with something simple.

The majority of the code you write for a model based test will be implementing Operation<TActual, TModel> classes; each one of these classes describes an instance of performing some sort of work against the object-under-test and being able to validate those results against what the model predicts.

Each Operation<TActual, TModel> class has two methods that need to be populated in order for an FsCheck spec to be executed:

One important thing worth mentioning about Operation<TActual, TModel> classes is that they usually require some sort of input in order to be effective. I find that it’s best to provide that input into the constructor of the Operation class, because then you can use FsCheck’s Gen and Arb generators to create randomized data for each instance of the Operation (more on Gen and Arb later.)

First thing we’re going to do now is describe how this operation will run inside the Run method:

The AddToHead method appends the newNode, created using the data passed into the constructor of this AddFirst operation, to the head of the linked list which represents the underlying IChannelPipeline object.

If the IChannelHandler at the front of this list after the operation is anything other than AddFirst.Handler then we know this test is invalid. So let’s check it!

The Check method executes the IChannelPipeline.AddFirst(IChannelHandler h) method to add Handler to the front of the pipeline, which should bring the state of TActual up to date with the state predicted by TModel.

For a real model based test, we want to define an Operation<TActual, TModel> class for each operation we want to test within the same model for a given set of features under test - so we’ll see some ones not included on this document here when it comes time to run this test.

Before we can run our model-based test, we need to give FsCheck a way of randomizing the following two things:

To do this, we will need to make use of the Gen (generator) and Arb (arbitrary) classes in FsCheck.

The difference between Gen and Arb? Arb supports the “shrinking” operation we mentioned earlier, i.e. being able to distill down a failing test case from 1000 steps to four. So we will be using Arb to generate our Setup<TActual, TModel> since we can shrink the results applied to it from there. Otherwise, we only need to use Gen.

If you recall the constructor of our AddFirst operation, it takes a NamedChannelHandler as a constructor argument. All of the property based tests we executed in the previous article used built-in CLR types and FsCheck has built-in Gen classes defined for each of those already. To generate randomized instances of our own types, we’re going to need to create our own Gen instances.

On the NamedChannelHandler class itself we define a Gen<string>, which will create a randomly assigned name using FsCheck’s built-in Gen<char> generator, and then we use the output of that generator to serve as the input for our Gen<NamedChannelHandler>. FsCheck is written in F# and uses these functional composition techniques to express data generation and randomization very succinctly.

N.B. Don’t use Random for generating randomized data with FsCheck. One of the really important and powerful features of FsCheck is that it gradually increases the complexity and size of its random tests over time, and in order to do that effectively it has to manage how data is randomly generated.

So always use FsCheck’s built-in Arb.Default as a starting point for seeding data you might need for a random test if at all possible.

And thus we repeat this process for each possible Operation<TActual, TModel> supported by the ChannelPipelineModel and end up with something like this:

Great! Now we can randomly generate any of our operations against the model. Last thing we need to do is implement the Setup method on ChannelPipelineModel and we’ll be ready to go.

I omitted the vast majority of the code used to write this model-based test for the sake of brevity, so if you had any trouble following this: read the full source code here.

ChannelPipeline_should_obey_mutation_model will automatically be treated by XUnit as a Fact, and we’re going to execute this model-based test 1000 times according to the configuration I set on the Property attribute.

Let’s see what happens when I run this.

Ooof. Failed after 795 tests! That’d be a pain in the ass to debug… Let’s see what the shrinked reproduction steps had to say about it.

Well thankfully, FsCheck shrunk this failing test case into 10 steps (omitted for brevity; the output is extremely verbose) and the error message behind the failure is self-explanatory:

Aha! We tried to add a handler with a duplicate name to our pipeline, which is illegal! Therefore - our AddFirst operation needs to have a precondition to screen against that!

Now if we run that, our model-based test will pass!

So what really happened in our model-based test? What did this prove?

The idea behind a model based test is that you have your object under test, the IChannelPipeline in this instance, and a separate model designed to predict how it will perform. The model-based test proved that for 1000 randomly generated combinations of the operations we designed against the IChannelPipeline that each of those operations performed exactly as predicted by our model.

If 1000 tests isn’t enough, we can ramp up the number and make it even higher. This model-based test is capable of detecting errors and design faults that no manually-written test would ever be able to catch. That’s the power of random testing.

Learn more about FsCheck here at its official website.

Say tuned for the next and final post in this series: Writing Better Tests Than Humans Can Part 3: Verifying the Safety of Network and Concurrent Code FsCheck in C#.