How to Automatically Utilize Multicore Servers with Node on Windows Azure

One major advantage of developing Node applications for Windows Azure is the ability to have your Node apps managed directly by IIS via iisnode.

You can read more about the benefits of iisnode here, but I want to call out these two points specifically from the iisnode wiki:

Scalability on multi-core servers. Since node.exe is a single threaded process, it only scales to one CPU core. The iisnode module allows creation of multiple node.exe processes per application and load balances the HTTP traffic between them, therefore enabling full utilization of a server’s CPU capacity without requiring additional infrastructure code from an application developer.

Process management. The iisnode module takes care of lifetime management of node.exe processes making it simple to improve overall reliability. You don’t have to implement infrastructure to start, stop, and monitor the processes.

Scalability on multicore servers with Node typically requires developers to use the Node cluster module and write some code which spawns one node.exe process per available processor and write your own handlers for what to do in the event of a failed process and so forth.

Update: It occurred to me after I initially published this that many developers may not understand the need for multiple node.exe processes. If you read through my “Intro to Node.JS for .NET Developers“ you’ll get a better sense for how Node works under the hood – the gist of it is that Node handles all incoming HTTP requests on a single thread, and thus can only utilize a single core at any given time regardless of the number of available processors. Having multiple Node.exe processes handling HTTP requests allows for multiple event loop threads, all of which can be run in parallel across different processors. That’s why this technique is important for multicore systems.

IIS and iisnode can take care of this for you automatically without you having to write any code to do it (a good thing,) and on Windows Azure you can automate this via startup task (fork the source on Github:)

If you want to use this startup task in your Node project, follow these steps: 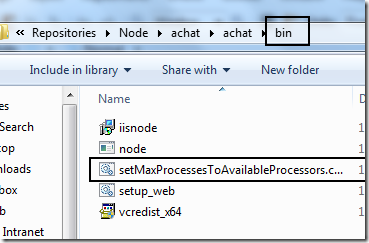 To verify that the script worked:

Let me know if you have any questions!