This is an archive of a blog post I wrote for the MarkedUp Analytics blog on July 23rd, 2014. It’s been a popular post and I’m posting it here in order to preserve it. I shut down MarkedUp in November, 2014.

The MarkedUp team has had experience developing SDKs, high-performance APIs, working with Cassandra / Hadoop, and service-oriented software for several years. However, when we started laying out the blueprint for MarkedUp In-app Marketing we knew that it would require a radically different set of tools than the traditional stateless HTTP APIs we’d been used to developing for some time.

Before we dive into the the guts of how the system works, it’s more important to understand what the MarkedUp team is trying to achieve and why.

We wanted to build a product that made it extremely easy to:

Our Analytics services have a reputation for being tremendously easy to use compared to the alternatives – we wanted to create a similarly good experience for in-app marketing automation.

With that background in mind, now we can talk about how In-app Marketing works.

We included the following diagram in our public launch of MarkedUp In-app Marketing, and it’s a helpful launch point for discussing the technology behind it. 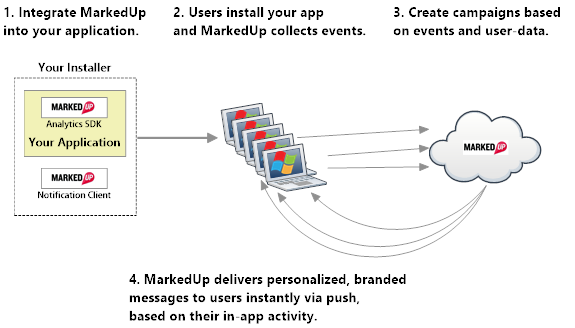 The process for working with MarkedUp In-app Marketing looks like this, from the point of view of one of our users:

And here’s an example of an actual behavior we can target:

“Select all users from the United States and Canada who installed after 6/1/2014, have run the app within the past two days, have had event foo, had event bar, and have viewed page Buy.”

In this case events “foo” and “bar” are some arbitrary events that are specific to a MarkedUp customer’s application – they can mean anything.

So what’s challenging about building this product? Let’s put this in list form:

The real-time component is what makes this entire project a challenge – and no, it is not optional. It’s a real competitive advantage and essential to our “it just works” promise we make to our customers. We’re in the business of delivering on promise of “better experience than everything else” at MarkedUp.

So how in the hell were we going to be build a system that was highly-available, stateful, loosely-coupled, and able to respond in real-time?

As with 99% of challenging technical problems faced by today’s software developers, a solution was already invented in the early 1970s: the Actor model.

The Actor model’s premise is that every component of your system is an “actor” and all actors communicate with each other by passing immutable messages to each other. Each actor has a unique address inside an actor system, even across multiple physical computers, so it’s possible to route a message to one specific actor. Actors are also composed in hierarchies, and parent actors are responsible for supervising the child actors one level beneath them – if a child actor crashes suddenly the parent actor can make a decision about how to proceed next.

The actor model appealed to us for the following reasons:

There are certainly other ways we could have solved this problem and we evaluated them, but we were ultimately sold on the Actor model because of its simplicity relative to the others.

We teamed up with some other like-minded folks to develop Akka.NET – a distributed actor framework for .NET that closely follows Scala’s Akka project.

Akka.NET offers all of the important features of the Actor model in C# and F#, and a number of critical features that were essential to building MarkedUp In-app Marketing:

We settled on Akka.NET as our framework and used it as the building blocks for the back-end of MarkedUp In-app Marketing. 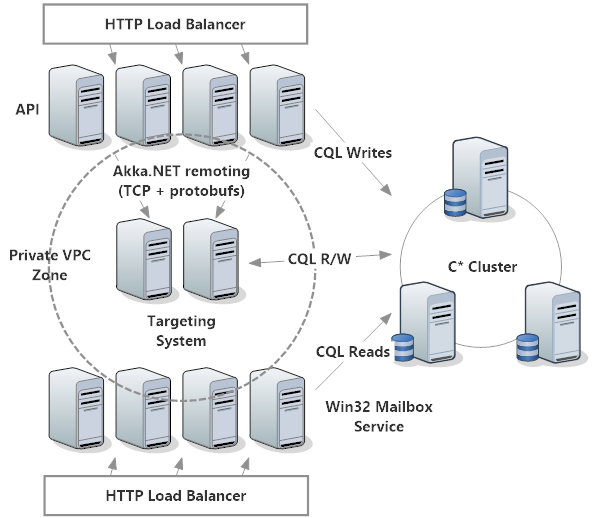 We’ve left out some details of our service-oriented architecture above, but the network topology shown above covers the In-app Marketing product in its entirety.

MarkedUp has two public services exposed directly to end-users via an HTTP API:

The goal of our Targeting System is to take the streams of data directly from the MarkedUp API servers and populate mailbox messages for individual users in accordance with the app developer’s filtering rules, and we use Akka.NET to do this.

Success for MarkedUp In-app Marketing’s Targeting System is defined as “being able to subscribe a user into one or more campaigns within seconds of receiving the segmentation data specified by the customer” for N concurrent users per server, where N is a coefficient determined largely by the size of the hardware and number of potential campaigns per-user, which varies for each one of our customer’s apps.

Our product is designed to filter messages for specific users for campaigns that are specific a customer’s app, so we reflected these relationships in our actor hierarchy.

Data arrives to the Targeting System from the MarkedUp API via Akka.NET’s built-in remoting over TCP sockets, and we’ll get into the details in a moment. For the time being, all you need to know is that the data is routed to our API Router, a round-robin pool router actor that specializes in concurrently load-balancing requests across a number of worker actors (API Router Agents) who actually respond to the requests.

The number of workers that exist at any given time can be hard-coded to a value of N workers, or it can be resizable based on load depending on how you configure the router.

Each API Router Agent is responsible for doing one thing: making sure that data for a specific user makes it to that user’s actor. Here’s what that process looks like: 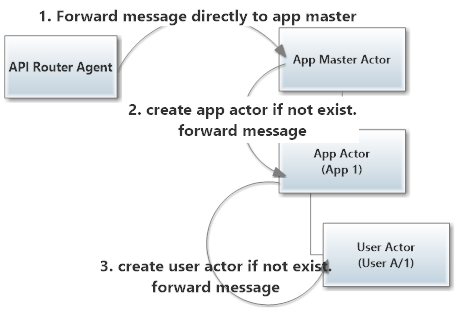 And here’s a rough idea of what the source code looks like:

The PatternMatch.Match method is used to filter messages based off of their C# type – any messages that we don’t match are “unhandled” and logged. In Akka.NET, all messages are just objects.

In terms of where we’re sending messages, we have a fixed address scheme inside our in-app marketing product that makes it easy for us to locate individual users, campaigns, and apps. Suppose we have an app called “App1” and a user called “UserA” – we use Akka.NET’s built-in address scheme to make it really easy to determine if this user already exists.

Every single actor inside Akka.NET has a unique address – expressed via an ActorUri and ActorPath, like this:

When you’re routing messages within the in-process actor system all you really care about is the ActorPath – the /user/parent/child part. 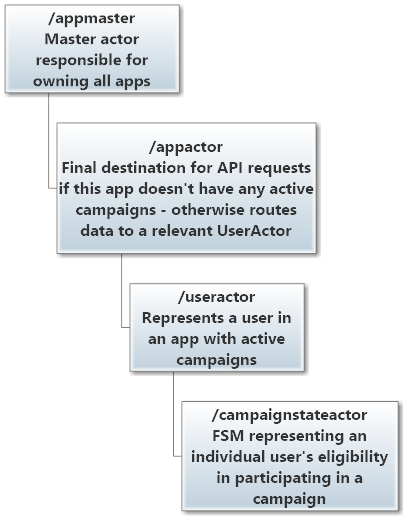 So the API Router Agent forwards the message to App Master which kicks off a process of lazily creating App and User actors on-demand, but eventually the messages do arrive inside the inbox of the User Actor.

Here’s what the User Actor’s initial state looks like in C#:

After a User Actor has determined that it’s eligible to be subscribed into at least 1 additional campaign, it’ll change it’s state into a “Ready” state where it begins sending messages to the “Campaign State Actors” responsible for filtering the rules for every possible campaign this user can belong to.

The User Actor has three jobs:

Items #1 and #2 are pretty generic, but item #3 is more interesting – how do we determine that an app user is no longer using their application?

We do this by setting a “Receive Time” that marks the UTC time a user last received a message from our API:

The SetLastReceive function sets this time value, and then we have a timer using Akka.NET’s FSM’s built-in scheduler that checks on whether on not this user is still active once every 60 seconds:

If we receive a “RecycleIfIdle” message from this timer and the user is determined to be idle:

Then the User Actor stops itself and all of the Campaign State actors beneath it. This is how we free up memory and resources for future actors.

The Campaign State actor itself is another FSM and it communicates with a group of dedicated “Filter Actors” who process the campaign’s rules via a domain-specific language we invented for filtering. All the Campaign State actor does it process the results from the Filter Actors and save its state to Cassandra or send messages to the user if the user’s event stream satisfies all of the requirements for a campaign.

The MessagePublishingActor lives inside the MarkedUp API and uses a RoundRobinGroup router to communicate with specific, named Actors on a remote system.

In production we can have several Targeting System’s serving as routees and we use a ConsistentHash router to make sure that all messages for the same user always arrive at the same server, but for the sake of brevity I rewrote this use a single server and a RoundRobinGroup router.

The important part, however, is the addressing – using the /user/api convention, which is the valid ActorPath for the API Router Actor on the Targeting System, Akka will automatically route my messages from the API server to the Targeting System via TCP, and then Akka’s remoting internals will ensure that these messages are correctly routed to this actor.

As for the messages themselves, and this is important – both the MarkedUp API and the Targeting System share a common assembly that defines all of the message types that can be exchange over the network. Otherwise we couldn’t deserialize any of those messages at the other end of the network connection.

Akka.NET has been a boon to our productivity, because of how simple its programming model is – instead of writing a piece of code that tries to determine campaign eligibility for 10,000 users in parallel, we can write a piece of code that makes that determination for a single user and run 10,000 instances of it with minimal overhead.

The actor model does an excellent job of atomizing code into very small parts, particularly because actors can only process one message in their inbox at a time (except for router actors.) The serial nature of message processing inherently makes everything inside an actor thread-safe, so you can store local state inside each actor instead of having to rely on a big synchronized cache or polling a distributed cache in Redis / Memcached.

We’ll have some more posts in the future about some of the other cool stuff we’re using Actors for and some of the integrations we’ve set up, such as our live debugger using SignalR and Akka.NET’s logging capabilities.

I preserved the original MarkedUp In-App Marketing Demo on my personal YouTube channel, so you can see what this system actually did!