On a Mission to Mars

This weekend I went through the Landmark Forum and had to confront a big secret that I’ve been keeping hidden for virtually my entire life: the true aim of my ambitions.

Ever since I was a middle schooler, I’ve wanted to help build the first human colony on Mars. I’ve multiple hours per day thinking about it for years and years and told no one. I was afraid that people would think it’s a ridiculous goal, and that I wasn’t successful enough to do it yet. And really, I was scared that I would fail. So I let these fears stop me from ever trying or ever sharing it.

The Forum helped me realize that these fears are bullshit.

I’m going to help put the first permanent human settlement on Mars. That’s my mission, and today I’m committing to realizing the possibilities that go with it. Sure, it’ll be really, really hard - but that’s what makes it worth doing.

Let me tell you where this all started…

It all began with a shitty Val Kilmer movie 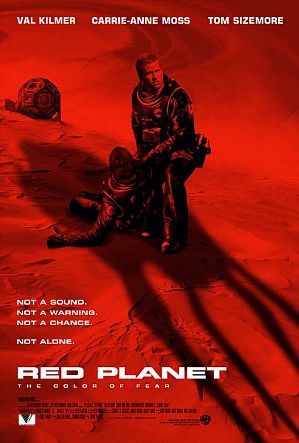 When I was in middle school, I saw Red Planet one night. The movie was entertaining enough - but one plot detail it contained stuck with me for years as a fascinating possibility.

In the movie, scientists had begun the process of “terraforming” Mars - the word “terraform” literally means “to shape something in Earth’s image.”

Terraforming is a process by which you take a satellite like a planet, moon, or asteroid and reshape its environment to mirror Earth’s. Create a breathable atmosphere, sources of water, human-livable temperatures, Earth-like weather, and so forth where there was none before.

It’s a powerful idea that’s been around in science fiction for a long time, but the way it was done in Red Planet fully captured my imagination so completely that it’s stuck around for years.

Scientists bioengineered species of algae that could sustain themselves on the materials found on Mars’ surface to gradually produce breathable atmosphere over time, and the algae was bred to evolve with the planet as the atmosphere began to form. Rather than inventing massive terraforming machines that used traditional 20th century approaches to produce something (chemical input + combustion / electricity = results) - the Red Planet writers exposed me to an entirely new possibility: design a simple organism that could use nature itself to achieve this goal without any further input from humans.

This idea gave me a profound new sense of possibility for myself and mankind.

I took from Red Planet that humanity is destined to become interplantary species if we look past what we’ve done before and consider new approaches to challenges that seem impossible. Because they only seem that way - and that’s how many people choose to perceive them. But the reality is that most of them aren’t impossible. Really, really, really, really hard and perhaps not possible today. But they’re challenges that are all possible to overcome tomorrow.

In my view, the mission to Mars consists of four distinct problem areas:

Transportation is the first problem, but it’s been solved - we’ve already been able to transport things to Mars.

However, we haven’t be able to transport very much to Mars. Getting stuff off of the Earth’s surface and into orbit is extremely expensive - Elon Musk, SpaceX’s founder and CEO, said somewhere that 90% of the costs of launching a rocket are just to escape Earth’s gravity.

This presents a really interesting challenge… Without a radical innovation in rocketry and space travel, it will never be economical for us to build infrastructure materials on Earth and transport them to Mars. It costs $22,000 per pound to send something into Earth’s orbit.

It costs $22,000 per pound to send something into Earth’s orbit. Shipping four tons of building supplies (8,000 lbs) into Earth’s orbit costs $176,000,000 today - that doesn’t cover any of the costs for transporting those materials the 54.6 million kilometers to Mars (when Mars is at its closest orbit to Earth) and landing them safely on the planet’s surface. The full cost is some multiple of the launch costs.

Edit: a previous version of this article said it was $10,000 per lb. Had a friend who works in aerospace inform me that the costs have increased to roughly $22,000 per lb now.

Did I mention that we only have that a “closest” possible distance to Mars once every 2 years or so? And that “closest” distance can be anywhere from 54.6m km to over 100m km?

From Universe Today: The last known closest approach was back in 2003, when Earth and Mars were only 56 million kilometers apart. And this was the closest they’d been in 50,000 years.

At Mars’ longest orbit it’s actually 401 million kilometers away, and the freaking Sun stands in the middle between Earth and Mars at that distance. You can read more about the relative distances and orbits of Mars and Earth here.

The point is: transportation, the strongest focal area of the Mars mission so far, only solves one part of the problem. And waiting for that problem to be “solved” without starting on infrastructure misses a massive opportunity to have some real breakthroughs. And even when it is “solved,” there are periods where Mars will be on the opposite side of the sun and we simply won’t be able to launch missions there.

The problem I want to solve is building infrastructure on Mars without waiting for a multiple order of magnitude decrease in the cost of transportation. And without needing people on Mars to build it.

Software architects like me get really concerned about latency in networked applications - the amount of time it takes to get a response from an application running remotely on a separate machine. We freak out if our web pages take more than 250 ms to load.

Well, when Mars is at its closest orbit it takes 3 minutes just for a signal from Earth to reach Mars and another 3 minutes to get a response back. At it’s furthest point it takes 21 minutes, and the sun sits in the middle and completely blocks any signal to or from Mars.

Here’s how long it actually takes information to travel from Earth to Mars, per the oppositions listed here as well as the theoretical min and max.

This type of latency is unheard of in software!

If you’re curious, I made a spreadsheet of possible “light travel time to Mars” calculations that you can try on yourself.

Trying to control a machine deployed on Mars that takes 6 minutes of round-trip time on it’s very best day, which happens once roughly every 50,000 years per request remotely via software or humans on Earth is an approach that is utterly doomed to fail from the start.

The solution is to build autonomous systems that are capable of making their own decisions in pursuit of specific goals, without needing any remote guidance or instruction from Earth. This is what what the NASA Curiosity rover did and all of the other machines before that.

I’m going to take this to the next level by introducing the field of Collaborative Computing.

Collaborative Computing consists of groups of machines that are able to work together as a team, self-replicate or invent new tools, and learn from each other in order to collaborate in pursuit specific objectives without any human supervision.

Today when people hear “collaborative computing” they think of collaboration software - like editing a Google Doc. I’m going to take this as an opportunity to define something much larger - a type of technology that has the ability to change worlds.

So, back to the economics of space travel - it’s too damn expensive to ship building materials and infrastructure to Mars, and there are periods of time when it’s simply not possible to even do it due to the relative orbits of Mars and Earth.

Thus, we need a way to ensure that infrastructure can be built without any human involvement and without any major transportation costs. Enter Collaborative Computing.

Imagine if we could send a small group of robots to Mars that were capable of doing the following:

No human involvement other than specifying the goals for these machines and providing them with initial designs and methodologies for accomplishing those objectives. That possibility literally has the ability to transform worlds, both Mars and Earth.

What needs to happen to make Collaborative Computing possible

Collaborative Computing is not possible today, otherwise we’d already have robots autonomously building roads and all sorts of other things here on Earth.

So what needs to happen in order to realize Collaborative Computing?

This is where I come in.

How Petabridge, Akka.NET, and Helios fit into this picture

So what does any of this have to do with what I’m doing today at Petabridge? The answer is this: Petabridge is going to be the company that develops the software frameworks for accomplishing this and many other “impossible” challenges.

Petabridge’s founders, Andrew and myself, believe that the future is something we create right now. And that in order to create a future where challenges like getting to Mars can be realized, we have to look past what we already know and consider new ways of doing things.

Petabridge helps people write their own futures by giving them visionary new technologies to use and including them in communities of users we build around them.

We just happen to build software development platforms for doing this today. So why don’t you get started and try Akka.NET or Helios?

Considering the type of programs im usually working on. I can already tell @AkkaDotNET is going to become a major part of my future work.

Collaborative Computing will be realized, and I invite you to join me in making it happen.