One of the first projects I put together this year was Captain Obvious, a nifty little application that runs off of AppHarbor and ASP.NET MVC3. What made Captain Obvious special for me was that it was my first time using something other than a relational database[footnote: typically I’ve only used SQL Server / MySQL in the past] in production – I chose MongoDB because it stands out to me as a lightweight, easy-to-work with store that’s easier to use for most CRUD applications. Since then I’ve gone on to build other projects which depend on Mongo.

What I’ve learned since is that MongoDB and SQL Server are tools that aren’t 100% interchangeable and are more situational than dogmatists make them out to be.

My goal in writing this is to help inform you on how you should decide to judge these two technologies as options for your ASP.NET / WebMatrix / WCF applications.

The key to using Mongo or SQL Server effectively is understanding how the underlying data model works and how this impacts your ability to read / write what you want when you want to the datastore. Below are illustrations of the relational (SQL) model versus the document model. 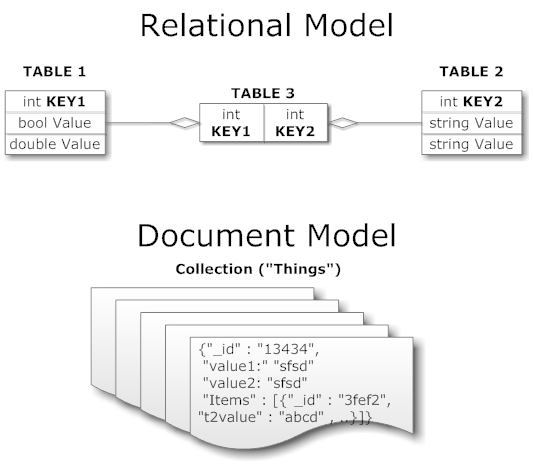 In a document model you have a relatively flat collection of items all identified by one primary key[footnote: You can add indices to other fields in Mongo too, but that’s outside the scope of this article], and instead of defining a relationship between two collections you simply embed one inside the other. So the relationship between the three tables in our relational model is expressed as a single, flat document in this model.

It is important to note here that there’s no schema that tells MongoDB what fields should or shouldn’t be expected in each document in the “Things” collection – in the relational universe each table is strongly, declaratively typed and every single item inserted into the row must conform to all of the constraints imposed by the relational database management system (RDBMS.) Anything goes in Mongo (although this can cause major problems, as we will see later.)

What Do Relational and Document Models Have in Common?

So what do these two data models have in common?

Seems pretty straightforward, right? But what’s up with documents being able to refer to each other?

As it turns out, implementing a database where every possible piece of information of interest to users is all embedded inside of its own distinct document comes with some drawbacks, so the creators of MongoDb added support for DbReference and the ability to do cross-collection references as well. A necessary evil in the name of practicality.

So what’s really different between the two models?

The picture that should be starting to form in your head of MongoDb vs. SQL Server at this point is a flat, simple system on one side and a multi-dimensional, rich system on the other. This is how I look at the two technologies in contrast to each other.

So at the end of the day, what's the bottom line for .NET developers who want to use Mongo or SQL Server in a web application? What are the REAL trade-offs?

Mongo IS the OR/M

The core strength of Mongo is in its document-view of data, and naturally this can be extended to a "POCO" view of data. Mongo clients like the NoRM Project in .NET will seem astonishingly similar to experienced Fluent NHibernate users, and this is no accident - your POCO data models are simply serialized to BSON and saved in Mongo 1:1. No mappings required.

I'm going to show you two similar pieces of source code I am using in production - one using NoRM and MongoDb on CaptainObvious and the other using Dapper and SQL Azure on XAPFest:

The amount of source code for these two technologies or the nature of it isn't wholly different.... What is drastically different is how I was thinking about the data when I was writing this code - I can save an instance of an Idea object to MongoDb on CaptainObvious without ever having created the collection first or defined a schema.

Whenever I want to look up an idea, I just pick one based off of a key value that I specify and I don't worry about any joins or anything (although I do have to load objects from the author collection if I need to display the author's name and contact info.)

In the SQL universe, I have to define my tables in advance and each time I want to extract an object, I have to think of it in terms of combined relationships between my tables and this requires a more thoughtful approach.

Mongo, in other words, lends itself to rapid application development whereas SQL Server has some innate friction built into any schema-based system.

In Mongo, the DBMS Isn't There to Protect Your Data's Integrity

One of the major advantages of a schema-based DBMS is that if the data a calling application tries to insert something that doesn't fit the schema into a row, the operation always fails. In Mongo, this isn't true - you can have one record in a collection with extra fields or fields of an odd type, and it can totally screw up the BSON serializer when it tries to process the collection (depending upon how flexible the serializer is.)

SQL users take this for granted, but when you have issues in Mongo along these lines they can be really frustrating to solve and difficult to debug.

In Mongo, Operations May Not Be Atomic

Operations are not atomic in Mongo by default, so all sorts of fun things can happen when you have multiple users changing properties on the same document. You can set an atomic flag to true, but even then operations still aren't really atomic (they're written from memory to disc in bulk.)

If you use Mongo and carry the same ACID assumptions that we learned on SQL Server, you might be in for a nasty surprise :p

Overall, the biggest difference between these two technologies is the model and how developers have to think about their data. Mongo is better suited to rapid application development, but in my opinion falls apart in scenarios where ACID-compliant systems are a must, like anything that goes anywhere near a financial transaction.

But, that's just my opinion :p