One of the other things I took away from Code Camp was a bit of .NET culture shock. As you can tell by glimpsing around on this blog, I am somewhat enamored with the idea of starting my own business. I’m a natural entrepreneur and it is my wont to think about startups constantly.

That being said, I’ve always wondered why a platform as widely adopted and supported as .NET isn’t more visible in startup culture. Many major open source  platforms and languages have very visible and vocal presences in the startup community, everything from mainstays like Python and PHP to even the more obscure and specialized ones like Clojure and Hadoop.

.NET on the other hand is conspicuously absent from the startup conversation despite the fact that it is a singularly larger platform than any of the others.

It’s like there’s a silent majority among the development community that just tinkers away on its own projects without even occasionally raising its hands and saying “here’s something clever and unique we did with this platform that no one else has done before.”

It’s somewhat tragic for the .NET community too – because the perceived lack of sex-appeal on the surface doesn’t match the reality of what the platform is capable of.

Just take a brief moment to peruse through CodePlex for more than a couple minutes and you’ll find thousands upon thousands of examples creative open source projects all built in .NET.

And in the startup space there actually are a number of .NET-based startups making it big, including this week’s Hacker News / Social Media darling Woot. But why oh why isn’t there a louder .NET voice in the startup community? Why aren’t there developers from Woot working with developers from StackOverFlow (also implemented in .NET) to encourage more startups to use the extensive .NET stack to create new and exciting products and services?

And most importantly, why aren’t there more startups adopting .NET?

It’s All about the Enterprise

I’ve heard all sorts of lame answers to this question before: “platform lock-in,” “no open standards,” “licensing costs,” and none of them pass the test of objective reality – yes, those are issues that might prevent some developers from adopting .NET in the startup space, but not enough to bar virtually all of them from using .NET, arguably the most comprehensive and versatile platform with the best tools and the best support.[footnote:I realize “best” is a subjective term, but please do your best to just stick with me here. I’m not trying to trash Eclipse, XCode, NetBeans, or EMACS, but just face it: Visual Studio destroys those in any feature set-to-feature set comparison.]

At Code Camp I think I finally figured out why this is: it’s the culture of the .NET community itself, not anything specific to the platform or the architecture which supports it.

.NET culture is centered around the concerns of  the enterprise – the large already-established businesses in the economy, not plucky up-and-coming startups. 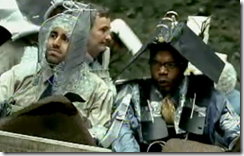 Most of the developers I met developed portals for giant healthcare providers with thousands of employees, worked on legacy code whose lifespan could be measured in decades, worked in teams with hundreds and even thousands of programmers, and lived in ecosystems ruled by large bureaucracies. These are problems to which few if any developers for startups can relate.

That’s why so many of the talks at Code Camp were staked around RAD methodologies for developing internal projects, coding standards, enterprise architecture, and other things that matter to developers who work in giant ecosystems.

And who can blame Microsoft for catering to the enterprise market – that’s where the money is! No one ever became rich selling high-end development tools to a handful of capital-starved, small companies.

As a result, developers working for startups and even the startup founders themselves don’t get much exposure to .NET and don’t think of it as an applicable tool for their purposes.

The flipside is that many .NET developers who want to work for hot startups don’t have as many opportunities to do so unless they abandon the platform for a more “startup-friendly” one or start a company themselves.

.NET developers in general, worry about architecture in order to support systems.

Startup developers in general, worry about architecture in order to support products.

See the difference? .NET is perfectly capable of fulfilling the needs of product designers and startups, but comparatively little[footnote:Again, this is an observation based on my experience with the .NET community thus far. I'm always on the lookout for any exposure to people who use .NET in a startup setting.] of the .NET culture, literature, and conversation is product-centric – instead the majority of it is structured around using .NET to support the needs of the business, not building the business’ products itself!

But It Doesn’t Have to Be

One thing that should be clear here is that any platform, not just .NET, can be used as a platform for building enterprise technology and for building new products. The platforms don’t often dictate their use – that’s the work of the people who develop on them.

If Microsoft wants to make a splash in the startup scene with .NET, and I have every reason to believe they do, then they need to do a better job evangelizing .NET’s capacity from a holistic new service / new product / new business perspective and not just for the enterprise.

Enterprise and startups aren’t mutually exclusive – they’re just different stages in the evolution of software, and there’s no reason why the startup community shouldn’t look at .NET as an attractive starting point for a new business.

The next article I’m going to write on this subject will cover why it’s a good idea for Microsoft to have .NET adopted more readily by the startup community.