Rise of the Popped Collar Programmer

I am frankly disturbed by a trend that I’ve seen both in-person and all over Hacker News / Reddit through the past year, and I am going to finally give it a name: “popped collar programming.”

Popped collar programming is the hipsterization of software development, and it’s happening in a co-working space, unprofitable venture-backed startup, or coffee shop near you.

Popped Collar Programming is essentially “adopting technologies for the sake of appearances” – technologists who’ve fallen victim to this way of thinking often make technology decisions without any regard for what’s the best tool for the job. 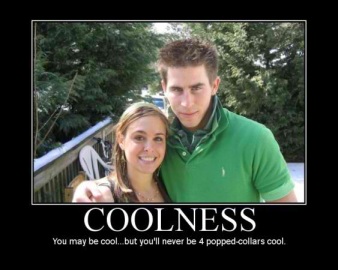 Once you’ve gone down the road of letting anonymous people on the internet convince you that having cool war stories with cutting edge technologies you can tell on Hacker News is more important than shipping software that works and is easy-to-maintain, you’ve lost the objectivity and pragmatism needed to be an effective software developer.

And it doesn’t stop at technology decisions; popped collar programmers spend more time picking out ironic t-shirts to go with their fedoras and oversize rubber watches than they do logging bugs.

Don’t Be That Guy

Popped Collar Programmers are inefficient (fitting square pegs in round holes from the start) and ineffective (building complex bug-prone architectures themselves to address problems that are already solved with widely-used technologies.)

If that argument’s not enough to convince you to stop yourself or your friends from being popped collar programmers, let’s try a live-by-peer-pressure, die-by-peer-pressure approach: you look like a complete pair of clownshoes in front of people who actually know what they’re doing.

If this sounds like you or someone you know, don’t be that guy. The solution here is to read The Pragmatic Programmer until you can’t stand to look at that Hadoop + Riak + Redis + Clojure-powered blog platform you created without vomiting in disgust.
Don’t. Be. That. Guy.