How to Play Software as a Team Sport

I’ve written before about how to start contributing to OSS and I wrote for the Petabridge blog about “How to Use Github Professionally” - both of those posts were aimed at helping developers who had experience working in private software organizations bring their experience and passion into open source software and more specifically, how to use Github as a platform to do that effectively.

This post is aimed at a different audience: developers who want to play the team sport of software. Regardless of your experience level you can always benefit from improving your ability to work with the other developers.

There are entire volumes of books written on this subject, so I’m not going to broach everything - but I hope you find this approachable, helpful, and useful.

“Keep it Small” with Task Decomposition

One of the most important items from “What Do You Need to Become an Elite Developer?” (2013) is:

Able to break down large projects into small tasks – people don’t launch rockets or build massive systems by setting out to do everything all at once; they break down massive projects into smaller milestones and small, fine-grained tasks. Really strong developers have the ability to visualize the end in mind and the steps for getting there. It’s an essential skill for an architect of any sort.

Why is this important? Building a complete picture of how a software system works in your head - or building a picture of how to create a new software system - is very difficult for most people to do well. Harder still is successfully communicating your vision of how everything works to another developer and having them walk away hearing exactly what you intended. Communication doesn’t scale well with technical complexity.

The solution is simple - we need to break apart large, complex problems or ideas into a sequence of smaller, interrelated ones. In the project management world we call this a “task decomposition.”

A simple example from this Akka.NET issue I just finished working on: “High Idle CPU in DotNetty”

On the surface this seems like a complicated issue - when Akka.Remote (our networking system) isn’t performing much active work it’s using a significantly higher amount of CPU resources than expected. In fact, if you roll back to a previous version of Akka.NET from 1 year earlier we don’t have this issue at all. So what’s the right way to attack this problem?

Start by writing down what we know and breaking down the problem:

Each step is discrete, small, and understandable. This helps make a complex, mysterious problem much more approachable. More importantly - it helps everyone else understand how you are reasoning about the problem!

Task decomposition also scales to much larger development problems, such as a “greenfield project.” In these larger contexts I often use a mind map to recursively decompose a big project into smaller and smaller tasks until I reach something that consists of many small, discrete parts that can be easily consumed and understood. 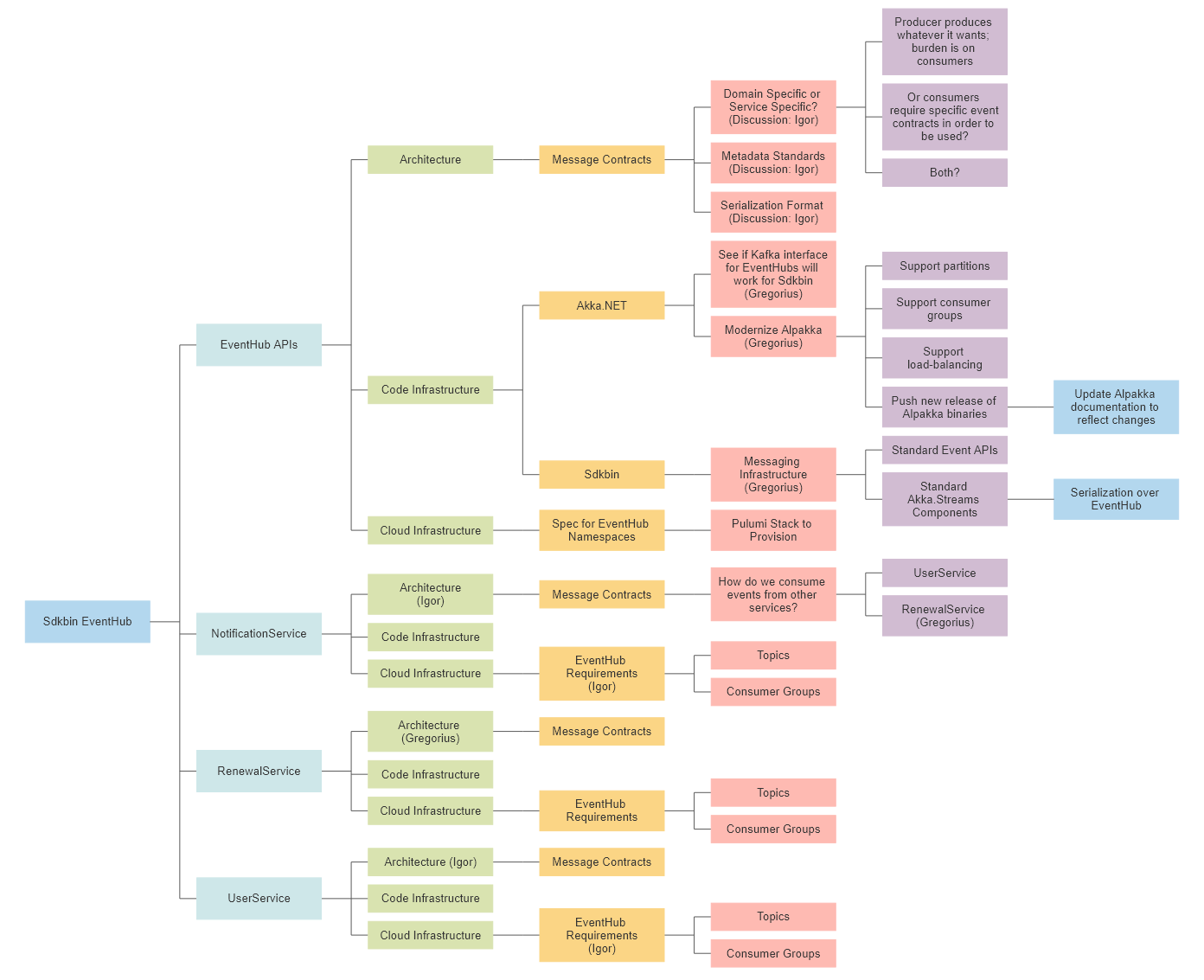 In the above diagram, I needed to help get myself and two other full-time developers on our team organized to work on the development of several new features for Sdkbin - lo and behold, we did this via an initial task decomposition via a mind map. And this isn’t the final state of this work either - each of the individual work items on this diagram will eventually need to be decomposed too once we discover the requirements and agree on some standards for how to approach this project.

Which brings us to our next point.

Work on Multiple Issues in Parallel

One of the biggest inefficiencies in software development is when:

The problem here has nothing to do with Developer B - it has to do with either:

I personally need to do this with my own work often - I don’t want to get stuck banging my head against the wall on a single issue at any given time, so I work on multiple issues and switch from one to the next. This helps me stay productive but also stops my time from being completely wasted when I’m waiting on someone else to finish an upstream task.

Review Your Own Work

As I mentioned in “How to Use Github Professionally”:

Review Your Own Pull Requests

One of the most difficult skills in programming is reading and understanding other people’s code - this is often because the developer who wrote it knows things the reader does not.

For instance, the developer might have written the code in what at first appears to be a Byzantine way, but it turns out this was necessary in order to avoid a runtime JIT bug the developer ran into during the development process. In an ideal world, developers would use code comments for this exact type of knowledge sharing.

But since you’re reading this and are thus interested in being an more effective programmer, here’s a great thing you can do to help both yourself and your team: review your own pull request first.

One of the easiest ways to ensure that your work gets reviewed quickly + accurately is to review your own code first. Document why you made these particular changes. Explain why this counter-intuitive change was necessary. Explain why you made this tradeoff. And so-on.

It’s expensive to review someone else’s code - and you will get ahead further and faster if you make them as inexpensive for others to review as possible. Your teammates will appreciate this and so will you when the shoe is on the other foot.

On top of that though, you will often find errors in your own code when you go through the trouble of reviewing your own work - which will reduce the number of cycles it takes to successfully introduce a new change to the code base.

Get in Regular Communication

When I wrote the “Taxonomy of Terrible Programmers” (2013), you’ll notice that several of the terrible developer archetypes have one crucial bad habit in common:

The common bad behavior is poor or withheld communication. This problem isn’t unique to the software industry but it’s a much more visible issue in engineering organizations due to the precise and technical nature of our work, which gets disrupted when effective communication is absent.

Getting in effective, regular communication with your team is the greatest difference between a software developer who spins his or her wheels, wastes time, invents new problems, and pisses everyone else off in the process versus someone who actually gets things done.

No one is impressed with your ability to spend 40 hours rediscovering a problem someone else on your team painstakingly discovered and documented earlier this year. All you had to do was ask or look in the bug tracker. No one will fault you for not knowing the technical minutiae in a legacy code base - but everyone will think you’re an idiot for not asking about it before you spent hours and hours making major, incompatible changes to it that will have to be discarded or reverted.

Let’s distill “effective communication” into something tractable for software development teams - this is not an exhaustive list:

Use the Resources You Already Have

So you’re contributing to an open source project that already has:

You submit a pull request that doesn’t pass the CI server, and you ping the maintainers asking why. You get ignored. Why?

In this case you didn’t use the resources you already have: the build logs and the test suite itself. All you had to do was click through and the build system will usually tell you what went wrong.

Alternatively, if this issue came up you could also search through the pull request / issue history and see if any other contributors have run into this type of trouble before.

It’s a good idea to get into communication often, as we mentioned above, but not when there’s a cheaper and faster route that doesn’t require another person’s time. Exhaust the simple options that, typically, don’t cost very much to try first and THEN bring the issue to the attention of other people on your team.

At the end of the day, working on software as a team sport really comes down to maximizing the utility of everyone’s time including your own. It’s cheaper for the entire team in aggregate for you to spend 10 minutes asking questions about how existing systems work (vs 40 hours learning it the hard way) and it’s also cheaper for you to spend 10 minutes digging through build server logs to try to answer your own question before bringing it up to someone else.