How to Use Asynchronous Controllers in ASP.NET MVC2 & MVC3

MSDN has some excellent documentation which explains the ins and outs of asynchronous controllers in ASP.NET MVC, yet there aren’t many good examples of how to use it online. Given this, I thought I would make one. 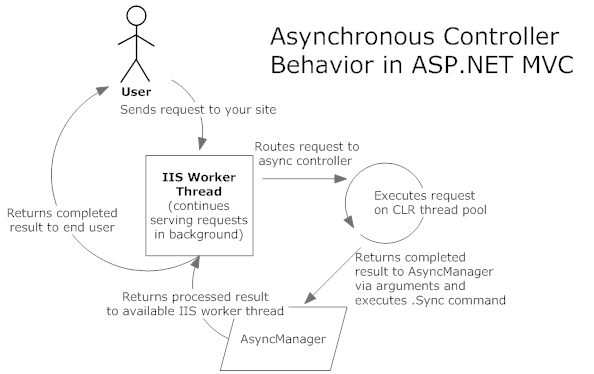 And in case my visual isn’t clear:

Asynchronous controllers are all about utilizing additional, cheap CLR threads to free up expensive IIS threads as often as possible. In any situation where you have a long-running IO-bound task, they’re a good way to improve the performance of your ASP.NET MVC application.

To create an asynchronous controller, all you have to do is inherit from the AsyncController class:

For every asynchronous action method you want to add to your controller, you have to actually supply two different methods:

Both of these methods on the asynchronous controller support the same action method (“Feed”) and any request that goes to “Feed/Feed” in our ASP.NET MVC application will be served asynchronously.

Here’s full source code from the asynchronous controller I used to build Geeky Reads, minus a bit of work I put in to use object caching:

Here’s what you should be looking at in this example:

The accounting is pretty simple: you call .Increment at the beginning of your long-running operation, and .Decrement once your operation is finished and the results have been passed into the AsyncManager.Parameters collection, which brings me to my next point.

AsycManager Parameters and Argument Names for the Completion Method

Notice how the AsyncManager parameters “feed” and “itemCount” match the argument names for the FeedCompleted method – that’s not an accident. The AsyncManager binds its parameter collection to the FeedCompleted method arguments once the .Sync method completes, and this is what allows the asynchronous method results to be passed back to the consumer.

If you’d like to see the full source for this example, check it out on Github.